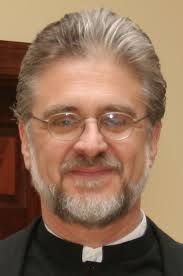 Fr. Emmanuel came to our  church community in November 1983.  Prior to his assignment here, Father Emmanuel attended Hellenic College and Holy Cross School of Theology in Brookline, MA, after spending one year as a biological science major at the University of Maryland.  After finishing his studies and receiving his Bachelor's degree in Philosophy and Religion from Hellenic College, he attended Holy Cross School of Theology.  During his last year in the Masters program, he was ordained a Deacon through the hand of the late Bishop Gerasimos of Abydos, on November 29, 1981.  After receiving his Masters degree in Theology, he went to Greece for five months as part of the Ionian Village Camp Program and as a pilgrimage to Mount Athos and other holy places.  Returning from Greece, he was ordained a priest through the hand of the late Archbishop Iakovos, on November 21, 1982, and took his first assignment to Rochester, NY, where he served as second priest at Annunciation Greek Orthodox church alongside Fr. Basil Kissal.

In November of 2017, Fr. Emmanuel was elevated to the title of Economos by His Emminence Archbishop Demetrios, Geron of America.  Άξιος!